At age 14, Gunnoe captured a photo of Amtrak’s Cardinal passenger train in West Virginia that would later be used on Amtrak’s National timetable. With more than 500,000 copies distributed, Gunnoe’s image circulated across the United States and several other countries in the spring through summer of 2010. Throughout the following years, Gunnoe continued his publishing efforts for railroad photography. Flash forward to today, Gunnoe has had his railroad images published in more than 15 magazines, journals and books. Gunnoe is a freelance correspondent for Trains Magazine, a leading magazine in the railroad industry. He also volunteers his time with the internet’s most popular online quality-controlled railroad database, which contains more than 500,000 photographs from more than 4,000 contributors. The website, www.Railpictures.net is utilized by dozens of advertising and media agencies seeking rail images for clients. 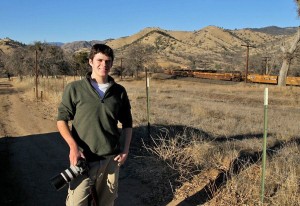 Gunnoe, pictured in 2012 during a rail photography trip to Bakersfield, California.

Gunnoe has been profiled by multiple newspapers and other publications including the Charleston Gazette, Center for Railroad Photography & Art, Chicago Tribune and more. Additionally, he serves on the Board of Directors for the Mountain State Railroad & Logging Historical Association, a non-profit preservation group in Cass, W.Va. as well as the Nitro Development Authority, a business growth and sustainability authority in Kanawha County.

Why did you choose to attend University of Charleston?

I chose the University of Charleston as a result of its unique curriculum, which consists of one-on-one interaction between faculty and students. The Integrated Communications program was incredibly appealing because of my interest in publishing, writing and photography. The advantage to obtain a degree in three years was also appealing. Now, I continue enjoying UC for its community-driven initiatives, cooperative faculty and personalized atmosphere.

What advice would you give to incoming freshman?

I would recommend they utilize all resources available to them. The one-on-one and direct relationships students can form with faculty, mentors, advisors, and other staff is one of the most valuable assets to students at UC. Ask questions, don’t be afraid to stand out, and be confident.

What are your plans after graduation?

Following graduation, I would like to pursue a degree in the railroad industry, whether from the perspective of corporation communications, public affairs, or government relations, I would like to find a career within the rail transportation industry. As an alternative, I’m considering any form of public relations or government communications, perhaps from the field of local or state government.

To view some of Chase’s work, visit: http://www.railpictures.net/Chase.Gunnoe/

To nominate a student or faculty/staff member for next month’s spotlight, please email laurentownsend@ucwv.edu.